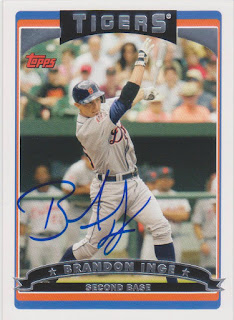 Back-to-back Tigers and back-to-back card number 28. What are the odds?

This is the third card of Brandon that I have posted on here. I posted the first two over five years ago and they can be seen here and here. I got those two signed at a Royals game in 2011. I got this one signed at a Kansas Stars game last year.

When I went to that game, Brandon was signing autographs right when I got into the seating bowl. I almost didn't go down there to get my cards signed by him because I got three done at that Royals game in 2011 and I got six from him at a Stars game the previous year. But, I figured that I brought some cards of him with me, so I might as well get them signed. So, now I have a cool dozen cards signed by Brandon. That is the most of a single player that I have that did not ever play for the Royals. In fact, it might be the most cards that I have signed by one guy irregardless of team.

When I last posted a card of Brandon, he was still an active player that had just joined the A's in 2012. He went on to play one more season after that with the Pirates before calling it a career. The 2009 All Star finished his career a .233 hitter with 152 home runs and 648 RBI.

I would call this card an error because Brandon is listed as a second baseman. Brandon played third in 160 games in 2005. He played second 19 times in his career, but those games occurred in his last two years of playing. On the back of the card, he is listed as a third baseman.
at 10:23 AM