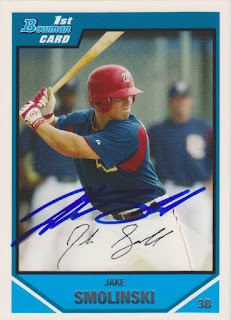 Here is a card that I got signed at Spring Training this past season. Jake was playing for the A's and I was able to get him by the dugout prior to a game at the Angels Tempe Diablo Stadium. He signed all three of my cards.

Jake has spent parts of five seasons in the Majors and really hasn't accomplished a whole lot yet. In his first season, 2014 with the Rangers, he did real well in the 24 games he played in. He hit .349 with 3 home runs and 12 RBI. But, the next season, he was hitting just .133 midway through June when the A's picked him up off waivers.

The A's kept him around for most of the 2016 season and he got into a career-high 99 games with them. Over his 290 at-bats, he hit .238 with 7 homers and 27 RBI. Unfortunately, he has battled some injuries since then that has limited him to just 35 games over the last two seasons.

Since the season has ended, Jake has been released by the A's and has signed a deal with the Rays.

In this card, Jake is shown with the Nationals, that team that drafted him in the second round of the 2007 draft. He played in their organization for just two seasons before being dealt to the Marlins. He was in the Florida/Miami organization for five seasons before getting picked up by the Rangers and making his MLB debut.
at 6:01 PM

Jake was high school teammates with one of my college teammates. I’ve always felt a minor connection to him because of it and have even thought about starting a PC of him.

That is pretty cool. You should probably start that PC sooner than later to have better odds at getting his lower numbered cards.