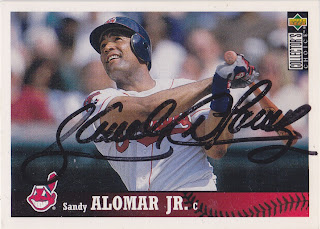 I got this card signed through the mail in either 1997 or '98. It was either the last or next to last success I had for about eight years.

Incidentally, this is not the first Junior Alomar card that I have posted on here. I posted the first one almost a year ago. That one was on a '90 Fleer card that was given to me by Rod of Padrographs. It's kind of cool to have two signed cards from him on two different teams.

If I said it once, I've said it twice, but I really liked Collector's Choioce. If Upper Deck would have released some CC sets in the last couple of years instead Upper Deck X, maybe they would still have a Major League liscense. It's unlikely, but you never know.

If you compare the two signatures of Sandy that I have, you'll see that they are very similar. The only difference is that the first one was signed on a vertical card and he signed his last name under his first. This one is horizontal and he had enough room to put his two names side by side. It's good to see that he took advantage of the extra space provided by the horizontal card. Most players would just sign it the same or just sign it like it was a vertical card.
at 1:24 PM

That's a cool graph. I got Robbie Alomar TTM this year and they both have some cool looping signatures.

Sandy has a nice signature.

That looks great on the horizontal card.