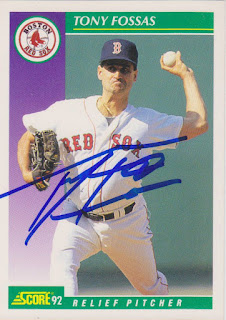 Here is the third and final card that I got signed by Tony Fossas at Spring Training last year. Tony was working with the Reds at the time and he signed for me while the team's minor league players were having their morning practice. You can see the first card of him that I posted here and the second one here.

Those first two cards both showed Tony with the Brewers. For whatever reason, I seem to have a decent amount of signatures from Brewers pitchers. Luckily, I was able to find this card and mix it up a bit. Even though I am not a Red Sox fan, signed cards of Red Sox players do not appear on this blog enough.

Tony pitched for the Sox for four seasons in the early '90s. During his tenure in Boston, he went 7-5 with 4 saves and a 3.98 ERA. It was with the Sox that he settled into his LOOGY role, pitching just 160.2 innings over 239 appearances.

After leaving Boston, Tony went on to pitch with the Cardinals, Mariners, Cubs, Rangers, and Yankees. He finished his twelve year career with a record of 17-24 with 7 saves and 3.90 ERA.