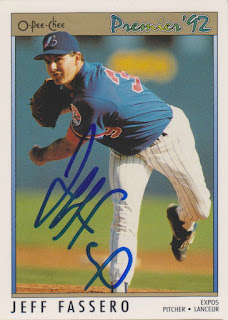 Here is the first of three cards that I got signed by Jeff Fassero at Spring Training last year. Jeff was the pitching coach for the AAA affiliate of the Reds, but he was nowhere to be found at the minor league diamonds that morning. But, he did show up at the Major League game and another fan pointed him out to me. That particular fan was impressed that I actually had a card of Jeff with me.

I am heading up to Royals Fanfest tomorrow. Why I keep going there year after year, I do not know. It seems like it gets worse every year. But, hopefully, with three big names gone, there will be less people there and I will be able to get some cards signed. Salvy is still priority number one as I still do not have any cards signed by him even though he has been with the team for seven years.

My biggest concern this year is that there are quite a few guys slated to be there that I do not have cards for. Most of them are young players that have no cards, but there are a small handful where every card I have of them is signed already. I just worry about sitting in a line for an hour and a half and then Scott Barlow comes out to sign.
at 9:46 PM

Just a heads up if you go to any spring training games in the future. AAA coaches always work with the Major League team throughout the spring. AA coaches stay at the Minor League complex working with the AAA/AA players.

Now that I think about it, that explains some things that I hadn't realized before (although the Royals AAA coaches seem to stick with the minor leaguers). The only other times I had seen AAA coaches with the minor camps was when the Dodgers were in Australia or when the Major Leaguers were not working out.

I always carry cards of the AAA staff of visiting teams whenever I go to spring training games. They're usually the first to arrive and typically always shocked that I had their cards on me.

Every team I saw last spring brought their AAA staff.