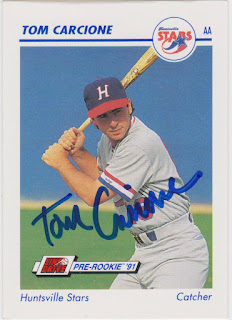 Here is a card that I got this past summer while I was in Lincoln, Nebraska. It was on our College World Series trip. When we make the trip, we usually camp out at a small state lake in Iowa. But, the state park was changed to a day use only park with no camping. When I found that out, I looked into another state park in Nebraska. But, with the chance of severe thunderstorms for the weekend, we opted to stay in a hotel in Lincoln. It is a little out of they way, but is so much cheaper than Omaha during the series.

So, the night we got to Lincoln, we went to a Lincoln Saltdogs game (American Association). I had cards of two of their coaches to get signed and got them both before the game started. We only stayed four or five innings. True to the weather report, it rained cats and dogs for almost an hour. Luckily, we made it out of the park before it came and sat out the storm at Blue Blood Brewery.

Tom played five seasons in the A's minor league system, reaching AA in parts of three of those seasons. For his affiliated career, Tom was a .229 hitter with 19 home runs and 151 RBI.