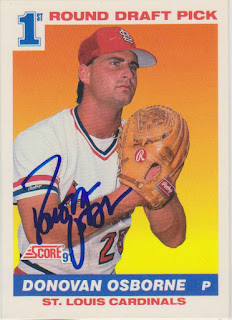 Here is the third and final card that I won in a Twitter contest in 2015. This card was actually the main prize and the other two cards were just thrown in. Those two cards featured Eric Bullock and Don Slaught.

Donovan pitched in the Majors for nine seasons. He spent the majority of the time with the Cardinals, but spent the last two with the Cubs and Yankees. Over his career, he racked up a 49-46 record with a 4.03 ERA.

His best season was with the Cards in 1996. That season, he won a career high 13 games while posting a 3.53 ERA and 134 strikeouts, both also career highs.

Donovan was the thirteenth pick in the 1990 draft out of UNLV. He made his Major League debut just two years later.