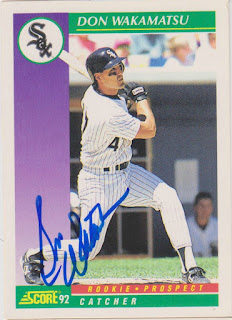 Here is a card of Don Wakamatsu that I got signed outside of Kauffman Stadium last season. Don was the bench coach for the Royals at the time.

That was the second time that I got Don to sign outside of The K for me. I got him to sign a manager card for me the previous season. I didn't have this card at the time, though, so I ended up buying it just to have a card from his playing days signed. This is the only base Major League card of him ever made from when he was playing.

Don got just a cup of coffee with the White Sox in 1991. While he spent well over a month in the big leagues, he was limited to just 18 games with 9 of those being starts. Over those 18 games, he hit .226 with no extra base hits or RBI. He walked once, struck out 6 times, and scored 2 runs. Then that was it as a Major League player.

Don will not be returning to the Royals this coming season. They let him go and Dale Sveum got promoted from hitting coach to bench coach. Don will now be the bench coach for the Rangers.

I just got him last month. Debated on going with that card, but opted for a minor league card instead. He does a baseball camp here in Florida every December.