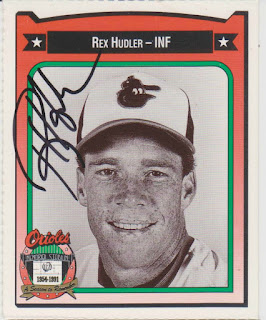 Here is the lone card of Rex Hudler as an Oriole. Wonder Dog played in just 14 games with the O's in 1986. In the 14 games, he either entered the game as a defensive replacement or a pinch runner. Because of that, he only came to the plate one time in an Orioles uniform and he flew out to center. But, he did manage to steal a base and score a run. On top of that, Baltimore was 12-2 in the games that Hud played in.

Rex signed this card for me two years ago at Royals Fanfest.

This is the second card from this set in my collection. The first one was given to me by O's super-graph collector, Ryan, from The Great Orioles Autograph Project. It featured Dick Hall.

I really like the concept of this set. I believe it was a stadium giveaway and it features every player that had played with the team up to that point. It looks like it came in sheets and you probably had to attend a few games to get the complete set.

As far as I have noticed, there are a few other teams that have done a set like this. I know the Brewers, Dodgers, and Rangers all have and I believe that the Mets and Yankees did sets as well. Unfortunately, I have yet to acquire a card from any of those sets.

Speaking of Royals Fanfest, the initial list of players to appear has been released and it is looking really bleak this year. There are currently three players that I have no cards for that are scheduled out of the nineteen. Since they never tell you who is going to be signing when and where, it really sucks sitting in line for an hour just to find out that Cam Gallagher is the person you have been waiting on.
at 9:18 PM