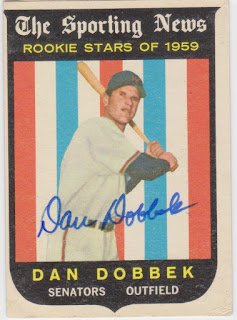 The next card from the '59 Sporting News Rookie subset is that of Senators outfielder, Dan Dobbek. I sent this card to Dan in 2013 and I had it back ten days later.

Dan's Major League career was much shorter then Bennie Daniels from my previous post. Dan career lasted just three seasons and 198 games, all played with the same Senators/Twins franchise. Over those three seasons, he hit .208 with 15 home runs and 49 RBI.

Most of those numbers came during his 1960 season. That year he clubbed 10 dingers and drove in 30. The one down side was that he hit just .218. He did walk 33 times to give him a respectful .316 on-base percentage, though. He followed that season with a .168 average over 125 at-bats the next year in Minnesota and that was the last time he played in the Major Leagues.

Remember- you still have about twenty-four hours to get in on the College World Series contest.