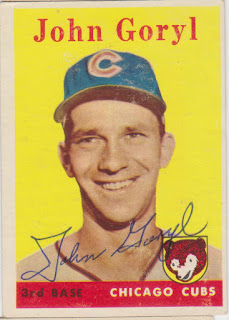 This is the second card of John Goryl that I have posted on here. The first one, his '81 Donruss manager card, was posted about three years ago and it can be seen here. I had been planning on sending that card to him when I ran across this one at the local card show and I figured that I might as well send this one along with it. For as much as I love getting '81 Donruss cards signed, I must say that this one came out looking much better than the '81D. The sig on this one stands out better than the blue on blue of the Donruss.

John had a relatively short Major League playing career, but not nearly as short as his managerial career. He played for the Cubs and Twins for parts of six seasons as a second and third baseman. Over those six seasons, he only got into 276 games and he hit .225 with 16 dingers and 48 RBI. His best season was with the Twins in 1963 when he played in 64 games and hit .287 with 9 homers and 24 RBI. Unfortunately, he regressed a ton the next season when he hit just .140 with two extra base hits, both triples, and one lonely RBI over 114 at-bats. That ended up being the last season John played in the Majors.

The Super Regionals start tomorrow. That means that I am almost a week away from heading to Omaha for some College World Series action!