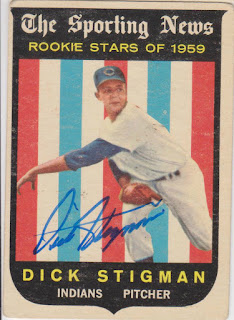 Here is the next card in the line of 1959 Topps Sporting News rookies and it features Dick Stigman. Like the previous three cards from the subset, I sent this card to Dick at the beginning of 2013 and I had it back about a month later.

Dick pitched in the Majors for seven seasons with the Indians, Twins, and Red Sox. He bounced back and fourth from the rotation to the bullpen his entire career, never settling in one spot for too long. In 1962, he lead the American League in winning percentage when he went 12-5 (.706). That year, he started the season in the pen and was 3-2 with 3 saves over the first three months of the season. He was then moved to the rotation and he went 9-3 over 15 starts to finish off the year. His strong finish landed him a starting spot the next season and he stayed in that role the entire season, going 15-15 with 193 strikeouts with a 3.25 ERA.

The College World Series Contest results will be up shortly.
at 10:21 AM