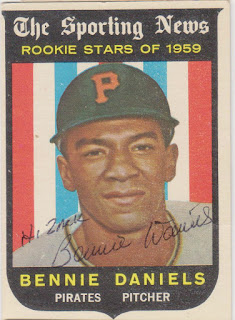 Here is the first of the newer '59s that I have. This one, like the next three, comes from the Sporting News Rookies subset. I always liked the look of this set and they were my favorites out of the 2008 Topps Heritage set. I have a couple of the Heritage cards signed and was really happy to add a few originals to my collection, as well. I mailed this card to Bennie in April of 2013 and I had it back two and a half weeks later. He misspelled my name in the inscription, but it is the thought that counts.

Bennie played for nine seasons with the Pirates and Senators. He started over half of the games he pitched in and went 45-76 for his career with 5 saves and a 4.44 ERA. During his career, he had reached double digits in losses five times and had a winning record once. That one time was a career year for him in 1961, his first season in D.C. That year, he pitched over 200 innings for the first and only time and went 12-11 with 110 strikeouts and a 3.44 ERA.

Two more teams have advanced to Omaha- TCU and Coastal Carolina. Two people picked up points with TCU's win while nobody picked Coastal Carolina to advance. There is one final game going on now and Florida has a nice lead in the seventh inning. By this time tomorrow night, I hope to have final tallies from phase one of the contest as well as having phase two open. So, make sure you keep checking back for phase two.
at 10:35 PM