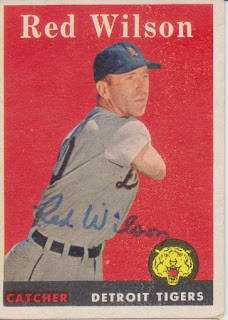 Here is the next card in the long line of TTMs I got back in 2013. I sent this card to Red in February and I had it back about five weeks later.

Red played in the Majors for ten seasons with the White Sox, Tigers, and Indians. Like most of the vintage catchers I have been posting recently, Red was also a back-up throughout his career. He spent the majority of his time with the Tigers and was a .258 hitter for his career with 24 home runs and 189 RBI. His best season was probably with Detroit in 1956 when he hit .289 with a career high in home runs (7) and RBI (38).

In 1960, Red was traded from the Tigers to the Indians for Hank Foiles. I posted a card of Hank two weeks ago.

After a rainy regional weekend, the super regionals are now set. There were a few upsets with Virginia, Vanderbilt, and Clemson failing to advance off of their home turf. Some surprises to make it out of the regionals were Boston College and East Carolina, both three seeds.

As of right now, both Wilson and anonymous Brandon have all eight of their teams in the super regionals. Everyone else has between three and six teams remaining. Most people only have one seeds left. The Lost Collector has five teams left with two of them being two seeds. Greg also has five teams, with one two seed and a three seed. If all of his teams win, he could go into phase two with a nice lead with nine points.

On a side note, this summer will be my tenth straight year of going to the College World Series. I have gone with my dad every year and every year he picks a California team to root for. He has t-shirts for UC Irvine, Cal, Fresno State, Fullerton, and UCLA. Right now, there is only one California team left- UC Santa Barbara. The odds are stacked against them as they take on Louisville. Will they be able to pull off the upset or will my dad go to his first Californialess CWS?
at 10:28 PM