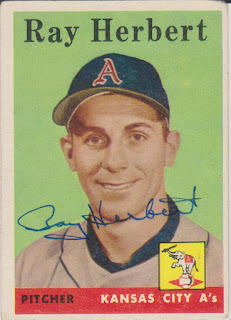 Here is the first of two cards that I got signed by Ray Herbert through the mail. The funny thing about the two cards, though, is that they were sent at two different times. I sent the first card because it was from a set that I did not have a signed card from. Then, about a year later, I came across this card at a card show and I bought it to get signed just because it was a Kansas City A's card. I sent this one out early in 2014 and I had it back about eight days later.

Ray pitched for fourteen seasons with the Tigers, A's, White Sox, and Phillies. He began his career as a reliever in Detroit and did not do that great early in his career. He pitched for the Tigers for parts of four seasons and was 12-14 with 7 saves and a 5.09 ERA through 207 big league innings. Early in the 1955 season, he was purchased by the A's, ending a four year run with Detroit.

With Kansas City, Ray was slowly transformed into a starter and did alright on some bad A's teams. He reached double-digit wins twice as an Athletic, notching 11 wins in '59 and 14 in '60. He also reached double-digit losses in each of those seasons, but did sport a 3.28 ERA in '60 when he logged a career-high 252.2 innings.

I, like most people, think of green when I think of the A's. Because of that, I think it is great that this card has a greenish backdrop, even though the team was still a wearing navy and red in 1958.
at 11:49 PM

Did you know you can shorten your links with AdFly and make money from every click on your shortened urls.