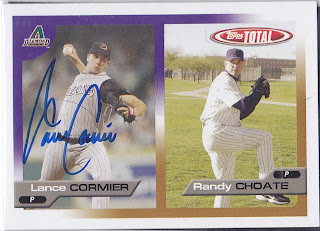 Here is the second of three cards that Lance signed for me last year on the final day of the regular season. It was a Sunday day game and Lance was out on the field early getting his work in. He was mainly just playing catch, but the guy that he was playing catch with was the other pitcher featured on this card, Randy Choate. When Lance came over to sign and he saw this card, he turned around to see if Randy was still on the field. When he saw that he wasn't, Lance told me that Randy had some stuff to do in the clubhouse, but that their lockers were next to each other and whenever one of them got this card to sign in the mail, they would have the other guy sign it too. I thought that was pretty cool. It's too bad that those two aren't on the same team this year.

This year, Lance was pitching for the Dodgers and he was having a rough start to the season. He pitched 13.2 innings and he gave up 15 earned runs and 4 home runs. Three days ago, the Dodgers designated him for assignment. Who knows where he will end up now.

I still can't get over how nice and stylish Lance's signature is.

The first Lance Cormier post can be viewed here.
at 11:03 AM

It's too bad he went in before he could sign the card. That would have been great. He does have a nice stylish sig.