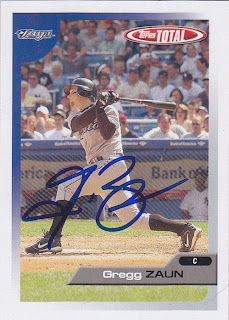 Here is a card that I got signed at a Royals game in 2009. Gregg was with the Orioles at the time and I was able to get this card signed after batting practice was over. Gregg was in the last group of hitters and I asked him to sign while he was making his way to the clubhouse. He said something back to me that I couldn't make out and he kept walking to the tunnel. I figured that was the end of that, but he popped back out just a few seconds later after setting his bat down.

The only problem was that didn't pop back out in the dugout by where I was standing. Instead, he went onto the field behind the dugout. So, instead of just handing him by card book, he motioned for me to throw my book to him. My card book is just a homemade book I have constructed and I do not throw it. The cards are held in the book by just two corners and I do not trust my construction enough to let it fly. The last thing I need is for some cards to fly out and then have someone who could care less about them pick them up off the dugout floor. But, luckily, someone threw Gregg a ball that landed down in the dugout by where I was standing. After he retrieved and signed the ball, I handed him my book and he signed all three cards for me.

Gregg has played in the Major Leagues since 1995. The strange part about that is that I have less than five different cards of him.

Gregg retired from the game in March and he is now helping out with the Blue Jays radio and TV broadcasts.
at 5:36 PM

I wouldn't throw that book either. Not for Zaun. It was nice that he came back out and didn't just blow you off.