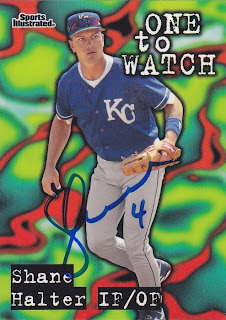 Have you ever seen a card quite like this? I don't know what the set designers at Fleer were tripping on, but it was apparently some good stuff.

I got this card signed at Fanfest last month. Out of all the Royals alumni that were there, Shane was the only one that was making his first Fanfest appearance. That was kind of cool since he really didn't have a long career and his Royals tenure only lasted 160 games. It's always nice when they bring in a somewhat obscure player. It's a good change of pace.

This was the only Shane Halter Royals card that I could find, so my choices were to get two Tigers cards signed or get this card and a Tigers card signed. You obviously know which route I went on that one.

Shane's Royals career lasted just two Major League seasons, after playing his first five pro seasons in their farm system. Hit hit .276 in his rookie campaign with 8 extra base hits. The next season, his average dropped to .221, but he had 14 extra base hits. Plus, he even pitched a scoreless inning that season. Towards the end of Spring Training the following year, Shane was traded to the Mets for a guy that never made it to the Majors.

I really do not know what to make of Shane's signature. I see an "S" and maybe an "h". Maybe he is like Ichiro and he only needs one name. Or, maybe his signature has shortened so much that he just signs "S" and then a quick and short "Halter". It's really hard to tell. At least I can make out the number he wore.
at 4:34 PM