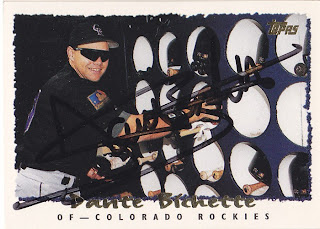 Here is the second signed Rockies card, that was given to me by Rod of Padrographs, that I have posted in as many days. This one features their four-time All Star, Dante Bichette.

Dante started out with the Angels and Brewers before becoming a star for the Rockies. Prior to his arrival in Denver, Dante had never hit .300, clubbed more than 15 home runs, or drove in more than 60 runs. That all changed in the thin Rocky Mountain air.

After his years in Denver, Dante played most of a season with the Reds before being traded to the Red Sox at the deadline. He finished that season in Boston and played there all of the following year, 2001. That was Dante's final season in baseball.

There is a lot going on in this card that makes it difficult to see the signature. But, I can't help but laugh to myself when I see those stupid glasses that Dante is wearing. Hopefully, that is what he is laughing at too.
at 9:54 PM

I remember writing to Bichette in the early 90s and getting my card back with a rubber-stamped "autograph."