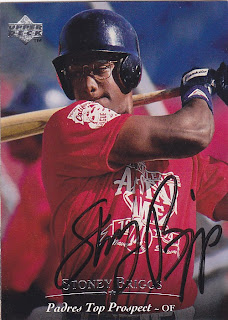 Here is a card that Rod sent me from the '95 Upper Deck Minors set. I liked this set a bunch when it came out, but for some reason or another, I didn't get too many packs of it. Because of that, this is my first signed card from the set.

After that season, Stoney started bouncing around a bit. He spent most of 1998 in the Mexican League and the Atlantic League, as well as two games in the Pacific Coast League. He played in South Korea in 1999 before heading back stateside the following year to play some AA ball for Detroit. He played for Baltimore's AA team in 2001 and then he seems to have sat out the 2002 season. He resurfaced in 2003 and he spent his last two seasons playing for the Camden Riversharks of the Atlantic League.

It is hard to tell which minor league team Stoney is representing on this card because of the All Star game t-shirt. But, it looks like the shirt says California League, so I am guessing that he was with the Rancho Cucamonga Quakes at the time. I wish it would say that on the front of the card.

Cool name and very cool how we crosses that T.

Wonder what happened to Stoney? I have his Camden Riversharks card I would love to get signed.