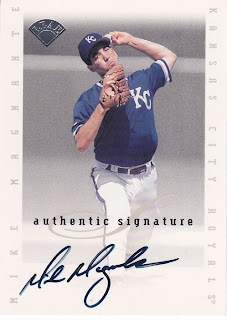 Here is the final 1996 Leaf Signature card that I will post for at least six months.

This was one of the other cards I bought with my hockey cards last week. The reason why I bought this card is simple. It cost me $.49. It was the cheapest signed card from the two '96 Leaf sets and I wasn't going to pass it up for that cheap.

When I bought the card, I was barely familiar with Magnante. I had seen the name before, since he played for the Royals, but I just figured that he played a couple of less than inspiring seasons and was never heard from again. I was wrong on that assumption. It turns out that Mike's Major League career lasted twelve seasons. The first half of his career was spent with the Royals before playing for Houston, Anaheim, and Oakland in the second half of his career.

Mike spent a majority of his time serving out of the bullpen and he appeared in 484 games in his career. He finished his career 26-32 with 3 saves and a 4.08 ERA. He had three sub-3.00 ERA seasons, and with him being a reliever, it is hard to say which was his best. But, since I am a bit biased, I am going to go with his rookie campaign as his best season. That year, Mike pitched 55 innings in 38 games and he posted a 2.45 ERA, which ended up being the second best ERA of his career.

Overall, I am very happy with my forty-nine cent autograph.
at 8:46 PM

You can't go wrong with an autograph that only cost a few cents more than a stamp. :)

I didn't even think about it like that. Great point, Paul!

Paul got that right. Since it costs at least .88 to send a TTM plus the time to put the request together and write a not, anytime I can get an autograph for a dollar or less is a steal!