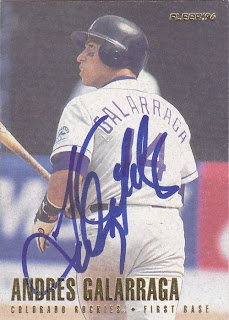 Here is a signed card from the Big Cat that Rod had sent to me. This is the third Rockies card that I have posted in the past week or so that was given to me by Rod. He must have been cleaning out his Rockies binder or something. Whatever the reason, it sure works for me.

Andres had much better stats and achievements than I had realized. For starters, he was a five time All Star for three different franchises. He won two Gold Gloves and two Silver Sluggers. He was also the National League Comeback Player of the Year twice. As for his stats, he finished with 399 home runs and a career average of .288. In 1988, he led the National League in hits, total bases, doubles, and extra-base hits. In 1993, he won the National League batting crown by hitting .370. In 1996, he led the NL in home runs and RBI and he led the league in RBI again in 1997. Overall, I would say that Andres had a very successful career.

This is the only signed card that I have from the 1996 Fleer set. I was in high school in '96 and collecting cards was not a priority for me. I bought a pack here and there just to see what was out there, yet I somehow never came across this set until just a couple of years ago. If you have never seen this set in person, it is a little strange. The cards are the most unglossy cards that I have ever seen in my life. I really do not know how to describe them. They almost feel soft to the touch. Also, they are printed on some of the thinnest card stock that I have ever seen. They are quite an unusual set by today's standards.
at 6:09 PM

The 1996 Fleer set definitely stands out, but I like it. I have very few cards from the set because I wasn't really collecting that year, but a lot of the ones I do have are signed.

The photo editor probably could have found a better shot of Galarraga, though.

I remember that these cards were great for autographs due to the non-gloss. So many sets around this time caused sharpies to bubble and I had no idea that I should "prep" the cards before trying to get them signed.