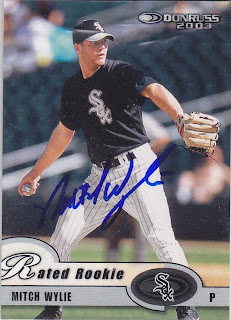 Here is the second Mitch Wylie card that I got signed last season at a Wingnuts game. The first card was posted in April and you can see it here.

I mentioned in the previous post that Mitch didn't seem like much of a signer. Paul, of Paul's Random Stuff, agrees with that remark since he couldn't get him to sign in 2006 while Mitch was with the Norfolk Tides. I guess I just got lucky that day and, truthfully, I wouldn't have gotten his autograph if it wasn't for the help of his teammate, Jacob Butler. Even though Mitch might not like signing for people, he still seemed like a very nice person and we talked for a bit after he was done signing.

Last season, Mitch pitched for the St. Paul Saints of the American Association. He went 8-7 with a 4.11 ERA as a starter for them. I have no idea if Mitch is pitching this season. I know that he isn't with the Saints this year and I couldn't find anything recent about him on the web.

Remember when Donruss made the Rated Rookie cards that had actual Major League rookies on them?
at 6:47 PM