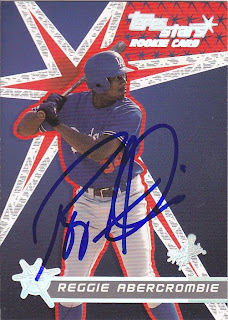 Here is a card that I got signed at a Wichita Wingnuts game back in May. Reggie is playing for the Sioux Falls Pheasants this season and he is doing quite well. He has been named player of the week in the league a couple of times and he will be playing in the American Association All Star game in Wichita at the end of the month. So far this season, Reggie is batting at a .353 clip with 17 home runs and 62 RBI in only 55 games. While the American Association is not the Pacific Coast League, those are still some impressive numbers. One of the home runs he hit was at the game I attended.

I bought this card from checkoutmycards.com because it was the only card they had at the time of him as a Dodger. I was a little bit worried about the signature not showing up very well because of the darkness and blueness of the card, but it turned out looking alright.

As for the Topps Stars set, this is the only card that I have out of it. I thought that it might have been an insert in 2001 Topps until I saw the number on the back. I have no idea who all is in the set, but if it is a bunch of Reggie Abercrombies, they might have picked a poor name for the set (unless it is a 2010 American Association set).
at 9:13 PM

My thought when I read this post yesterday was, "hey, I don't have that card."

Today, this card was in my mailbox. Funny how that works.

I remember seeing Abercrombie during some Marlins spring training games a few years ago. He had a few hits & played nice defense. I thought he was going to be a good player.

Good thing I'm not a prospector. :)

I did not realize he was ever in the Dodgers' system.