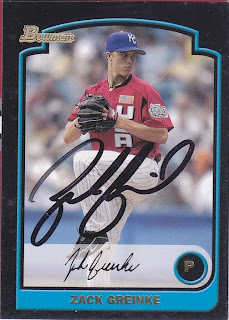 Here is the first of several Zack Greinke autographs that I have. This one was actually the second card that I got him to sign for me and I got it signed at the Royals very first Fanfest in the winter of 2008.

I don't think I need to tell you all who Zack Greinke is; he kind of made a name for himself last summer. Unfortunately, he hasn't had the same success this year that he had last year. It seems that everyone is laying off of his slider this year and that was his main strikeout pitch last season. He had 242 strikeouts last year in 229.1 innings. This year, he only has 113 Ks in 133 innings. So, he hasn't been striking batters out at the same rate as last year and he still isn't walking many, so that means that more balls are being hit into play. One result of that is that he has given up more home runs this year (13) than he did all of last year (11).

It is kind of weird seeing Zack with a Rawlings glove and Nike cleats. These days, he is a Mizuno guy. After winning the Cy Young award last season, Mizuno even presented Zack with a samurai sword. Based off of the press release, it seemed that Zack was much more enthused with the sword than the plaque.

If you ever want to see Zack's Cy Young award, it is on display at the Royals Hall of Fame. The Hall of Fame is located in Kauffman Stadium and is open year round.

Wouldn't you be more impressed with the sword? I mean, a plaque is nice and all, but we're talking about a samurai sword here. :)

I had forgotten about that sword.

I forgot about it too, Dave, until I started rambling on about Mizuno. Then it came back to me.

Paul- Now that you put it that way, I can certainly see where Zack is coming from. A sword would be pretty sweet!