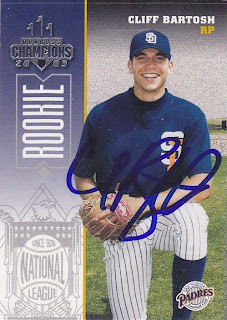 Here is the first Padrograph from 2003 and it features the former Padre minor leaguer, Cliff Bartosh. Until yesterday, I had assumed that Cliff was a career minor leaguer. But, that is not the case. Cliff played parts of two seasons in the big leagues, but neither one was as a Padre.

He played in 2004 with the Indians and he got into 34 games with them, all in relief. He posted a 1-0 record that year with a 4.66 ERA. It looks like he was primarily used as a LOOGY since he only pitched 19.1 innings in those 34 games. He did record 25 strikeouts, though.

The following season, Cliff pitched with the Cubs. The Cubs used him a bit differently than the Indians had. He appeared in 19 games with the Cubbies and he threw 19.2 innings, so he was more of a one inning guy than a one batter guy. Used in that role, he ERA rose to 5.49 while his strikeouts dropped to 15. Plus, he gave up 7 home runs that year, while he had only surrendered 4 the previous year.

2005 was Cliff's last season in baseball. I don't know if he blew his arm out or what, but it seems strange to just hang it up like that. In this day and age, it seems like players want to keep playing and chase the dream, even if they have to do it in an independent league. But, that does not appear to be the case with Cliff.
at 12:45 PM