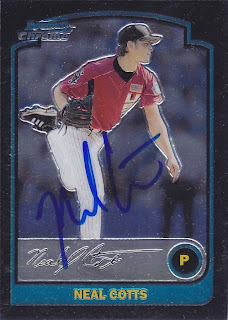 Here is a card that I got signed in Des Moines, Iowa last summer while Neal was pitching for the Iowa Cubs. I got it signed after the game when Neal was leaving for the night. I think Neal signed all three cards for me, but I am not a hundred percent positive.

Neal pitched out of the bullpen for the White Sox and Cubs from 2003 to last year. He has one Major League save and a lifetime ERA of 4.63.

This year, it appears that Neal is with the Indianapolis Indians, the Pirates AAA team. He is currently on the seven day disabled list and it looks like he has been on it all year since he has no stats.