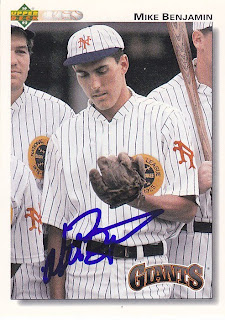 Here is the second and final Mike Benjamin card that I got signed in Omaha the day before the College World Series started. You can see the first one here.

As I mentioned in the first Benjamin post, Mike was sporting some of the best pork-chop sideburns that I had every seen in person. They must have been a new thing for him because right after Mike signed my cards, the Arizona State head coach came over and asked if he had the sideburns on the card. I told him no and that the only thing Mike had on in this card was a confused look. I was hoping that Mike might tell me a little more about that turn back the clock day, but that was not the case.

It is still a interesting looking card and I am glad that I was able to get it signed.
at 8:15 PM

Those are some neat looking uniforms.

Yes they are and I think I like the hats the best. They don't seem to wear the retro hats anymore for TBTCs.

I remember Mike with the Giants. Love the retro unis...with the caps, they really look great and that glove is awesome!