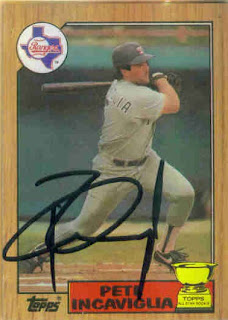 #550 Pete Incaviglia
I got this card signed at the beginning of September in Grand Prairie, Texas. Pete is the manager of the Grand Prairie AirHogs (yes, there is supposed to be a capital H with no space). I happened to be in the Dallas/Ft. Worth area as the American Association Championship was starting , so I decided to go to game one of that series rather than the Ranger's game. The AirHogs lost the opener (and eventually the championship) and barely 1,000 people showed up for the game, presumably because Hurricane Ike was less than a day away. While the game was going on, less than ten miles away, Adrian Beltre hit for the cycle against the Rangers. So, I missed out on a piece of history, but I did see a good game and a beautiful and unique ballpark. Plus I got in for free thanks to a friend that umpires in the American Association.
Also, this is my first, and so far only, Topps All Star Rookie card that I have had signed.
at 9:53 PM

For some reason, this is one of the most popular pages on this blog. I was just wondering where all of the traffic was coming from.

I'm going to see the Airhogs on the 19th. I'm hoping to get Pete and Pat Mahomes on some cards.