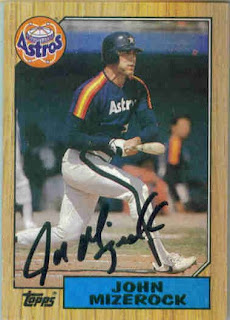 #408 John Mizerock
I have four different cards of John Mizerock. Three of them I got signed while he was in the bullpen waiting for the U.S. Navy Leap Frogs to jump into the park. This one, however, was obtained a few months later by the Royals parking lot. He parked his car and was making his way to the tunnel entrance. He had a coffee in his hand this time instead of the cigarette. I asked him to sign, he set his coffee down and came over and signed.
at 6:09 PM

Wow, i always love the autograph cards. I have auto cards on baseball, it's phil nevin classic 1992 AU.

Can we exchange link? Mine is: http://basketball4you.blogspot.com/

Thanks Cesario. I have a few basketball autographs that I got through the mail. My favorites are probably Shawn Kemp and Drazen Petrovic.