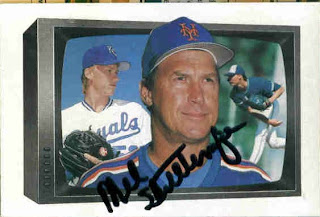 I went 19 years without getting one of these big beasts signed. I resisted so long just because of it's odd size. I always liked the card design (of the regular looking cards, not this one) but hated the size. But, last month I went to a Ranger's game against the Mariners and Mel was the M's pitching coach. This is the only Mel Sr card I have, so it was this or nothing. If the M's bring him back next year, I'll get an older card of him off of ebay and try to get that signed.

At the game, Mel was in the dugout talking to the bullpen coach, Norm Charlton (who I didn't even recognise). I asked him to sign and was going to throw my book at him, and he said "not over the dugout". So, he walked out by the tarp and signed it there.