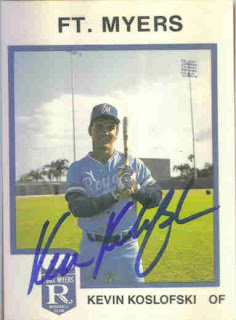 #2243 Kevin Koslofski
No, that number is not a typo. I got this card for Christmas one year as part of the Ft. Myers team set. I'm guessing that Procards put out a set for nearly every minor league team and they just numbered them all together rather 1-30 for each team. Also, I have no idea where the rest of this team set is. It's not with the rest of my worthless minor league cards which makes me wonder if it's in an album somewhere.
I got this card signed at the Royals Caravan in the winter of 1993. This was the year that the Caravan came to my middle school. I took my cards to school with me, but the players wouldn't sign there. They only talked. But at least I got out of class for awhile. Later on that night, they signed at the mall. Obviously, it was a pretty bad assortment of Royals that year. Kevin thought that it was pretty cool that I has such an old card of him. I doubt that there were any mainstream cards out at that point. Just some scarce minor league cards and some update/traded cards.
This is the first time that Baseball Almanac doesn't have an autograph of someone that I do. Take that!
at 12:47 AM

I saw him play in Omaha. He's on the short list of early Omaha Royals I remember seeing in person:

The only Major League card I remember of his was 1993 Ultra. Like you said they were probably few and far between!