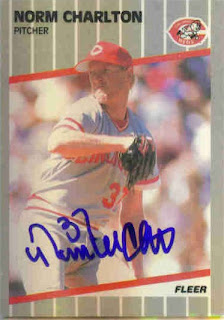 I mentioned Norm in my '89 Bowman post (how I didn't recognise him). Well, I got Stottlemyre to sign and as they were walking away, I asked someone if that was Norm Charlton. He said that it was. After batting practice, Mel and Norm were walking back towards the dugout, talking. I asked Norm to sign, but he was in a conversation and ignored me.

Well, about a week later, the Mariners were in Kansas City. This time, when Norm was heading back towards the dugout, I called him over and he came and signed all three cards.
at 2:01 AM