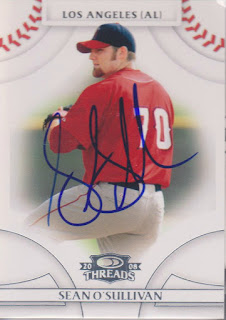 In 2011, my best friend and I took one of our annual ballpark road trips and we headed north that year. It was a short trip by our standards as we just took in a Twins game and a couple of minor league games. One of the minor league games that we saw was an Omaha Storm Chasers game.

Werner Park, the Chasers home, has one of the best set-ups for autograph collectors. Both clubhouses are in left field and the players walk down a single walkway to enter the field. Both teams use the same ramp and it is great. It can be a struggle as is gets closer to gametime, though, as there are quite a few players from both teams jamming up the walkway and you are trying to figure out who is who and find their cards. So, on that particular trip, I decided to 'graph the visiting team and I made by friend get the home team for me.

By the time Sean O'Sullivan came out, it was close to gametime and the walkway was crowded. I was able to pick Sean out of the pack and I called for him. I was getting cards signed by a visiting player at the time. He came over to me and I just played it off like I didn't call for him and pointed at my buddy. He had the card ready and handed it down and this is the end result.

With Wichita building a new ballpark, I hope that they have an entrance like Werner Park where you can 'graph both teams from one spot. It is so convenient.

As for Sean, he saw time in the Majors for parts of seven seasons with the Angels, Royals, Padres, Phillies, and Red Sox. Over that time, he was 13-23 with a 6.01 ERA. His best season was probably in 2009, his initial call-up to the Majors. He pitched in twelve games, ten starts, and was 4-2 with a 5.92 ERA. That was the only time that he threw over 50 innings in a season and had an ERA under 6.00.

I actually own a game worn Sean O'Sullivan Spring Training jersey. I picked it up for ten bucks at a Fanfest once thinking it would be easy to get signed. That never happened.
at 4:27 PM