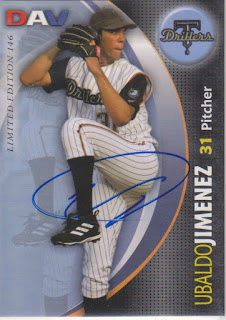 Here is the second card from the 2008 DAV Tulsa Drillers "team set" that I have been able to get signed. The set was given away at a random Drillers game I attended in 2008.

I got this card signed at a Royals game in 2012 while Ubaldo was a member of the Indians. He signed down the line right after batting practice. I had three cards of him, but wasn't sure if he would sign all three. So, I gave one to my dad and, since he signed the two I had, I came home with three signed cards from him that day.

Ubaldo last pitched for the Orioles in 2017. For his career, he holds a 114-117 record with a save, a 4.34 ERA and 1720 strikeouts. He had six double-digit win seasons, but also seven double-digit loss seasons. He played in one World Series and made one All Star team.

He was an All Star in 2010 and that was by far his best season as a Major League hurler. He finished the season 19-8 with a 2.88 ERA and 214 strikeouts, all of which were season highs for him. He finished third in the National Cy Young vote behind Roy Halladay and Adam Wainwright. He got the start in the All Star Game that year and threw two shutout innings while striking out Vladimir Guerrero.
at 6:49 AM