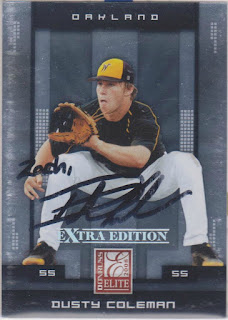 Here is a card that I got signed through the mail in 2009. I mailed this to the single-A team that Dusty was playing for at the end of the season and I got it back a few weeks before Thanksgiving.

The reason why I felt I needed to get this card signed is because it features a Wichita State player. When I was growing up, Wichita State baseball was the cream of the crop. They were always winning their conference and were always in the hunt to go to Omaha. While they are nowhere close to where they used to be, I still keep tabs on them. I saw Dusty play a few times in the 2008 Regional and Super Regional, so I thought it would be cool to try to get a card signed by him.

Dusty was drafted in the 28th round by the A's in 2008, but would never make it to the Majors with them. He got his first taste of big league action when he got into four games with the Royals in 2015, going 0-5 with three strikeouts.

Luckily, he got another shot two years later with the Padres. That time, he played in 27 games and he it .227 with 4 home runs and 9 driven in.

Dusty played in AAA all last year with the Padres organization. It looks like he is teamless right now and, considering he hit just .202 in 103 games last season, it very well could be that his career is over.