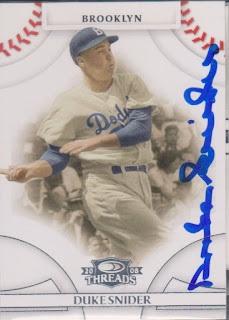 I started sending autograph requests through the mail during Spring Training in 1988. I only got one back, but I was so excited about it that I became hooked. I kept sending out TTMs to teams into my high school years before finding other interests. Then, in 2008, I found that there were databases online with retired players home addresses. Finding that rekindled my TTM spirit and I got back at it again.

This was one of the cards that I sent out TTM in my return to the hobby. Even though this set is great for autographs, I wish I would have sent another card. Ideally, an actual card of Duke's from his playing day would have been the best option. Second best option would have been a Topps All-Time Fan Favorite card. But, I went with what I had handy and it still came out looking great. It just didn't look time specific for Duke Snider.

Nonetheless, I still love this card and am glad to have it in my collection. Duke is a Hall of Famer that had five 40 home runs seasons, six 100 RBI seasons, made eight All Star teams, and played in six World Series. He got elected to the Hall in 1980.

I do not recall paying a fee for Duke to sign this for me, but I would not be surprised if I sent a ten dollar bill along with it.

I will say that for a non-licensed Donruss set, I am surprised that you can make out most of the team name on the front of the jersey, not to mention the cap logo.
at 12:05 AM

Can't remember where I got the address, but I have two TTM-signed cards by the Duke. I chose pretty well with the cards I sent. I'm glad he signed regularly in his later years.