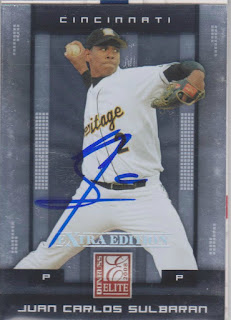 Here is a card that I got signed at an Omaha Storm Chasers game in 2015. JC was playing for the Chasers at the time and was nice enough to sign all three cards that I had of him.

That was my second attempt at getting this card signed. In 2009, I got about as close to getting a card signed as you can without it being signed. It was in St. Louis at the Futures Game. JC was representing the World team. Though I did most of my 'graphing on the USA side that day, I did venture over to the World side when all of the American players were off the field. JC was making his way down the line signing for people. As he was doing so, there was a staffer nearby telling him that it was about time to head in. He kept on signing and he made it to me. He grabbed my card book and my Sharpie and then the staffer told him it was time to go. Rather than signing this card real quick, he handed it back to me and told me sorry. Close, but no cigar. At least I made up for it six years later.

JC spent eight seasons in the minor leagues and never made it up to the Majors. He spent time in the Reds, Royals, and Cardinals organizations and played parts of two seasons in AAA. Over those eight seasons, he was 49-65 with a 5.48 ERA.

The Curacao native also had the pleasure of representing the Netherlands in two WBC tournaments.