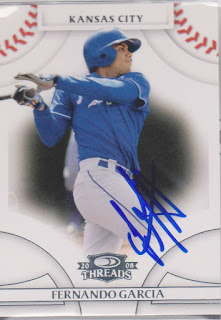 Here is a card that I got signed at a Burlington Bees game in 2009. I had very few cards to get signed at that game, so I bought a Bees team set just to make it worthwhile. But, it was nice to get the few cards I did take with me signed.

Fernando had a short baseball career. Drafted by the Royals in the 28th round of the 2007 draft, he would go on to play just four seasons in the organization. In his first pro season, he played in just 15 games and hit a whopping .088. Yet, somehow, Donruss decided to make a card of him.

He did slightly better the next year, hitting .238, and even better the year after that, hitting .260. In 2010, playing in high-A Wilmington, his numbers took a dip and he hit just .186. The Royals cut him loose after the season.

In 2011, Fernando would finally make it to Kansas City. But, it wasn't with the Royals, it was with the T-Bones. He did well in his limited action, hitting .303 in 24 games. After the season, Fernando retired from baseball.

In his limited action spread out over four affiliated minor league stops, Fernando managed to hit .227 with 2 home runs and 52 RBI in 691 at-bats.
at 9:19 AM