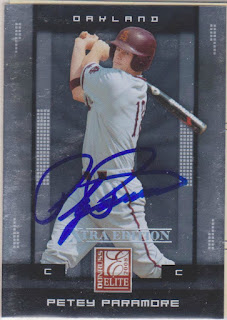 Here is a card of Petey Paramore that I got signed at a Wichita Wingnuts game in 2013. Petey was playing with the visiting Kansas City T-Bones at the time and he was nice enough to sign all three cards that I had of him.

Petey was drafted by the A's in the third round of the 2008 draft out of Arizona State. He would play in the A's farm system for just five years before moving on to the independent ranks. In those five years, he would spend the bulk of his time in some form of A ball and he hit .237 with 22 home runs and 136 driven in.

He played in the American Association and Atlantic League for two seasons before retiring after the 2014 season.