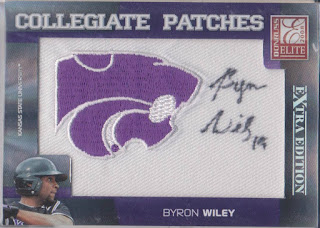 This is my last card from 2008 Donruss Elite. Unlike all the other cards from the set that I have posted, I did not get this card signed in-person or pull it from a pack. I actually bought this card from COMC. Being a K-State grad, I just could not pass this beautiful card up. Even if it wasn't signed, I still might have bought it. Now, since the Cats got spanked today in the opening round of the tournament, there will be no more talk about them.

By the time he came back in 2012, he was playing independent ball. He played a season in the Frontier League before joining the American Association for three seasons. Coincidentally, I ran across him at a Wingnuts game once and was able to add a couple more autographs to the collection from him. But, this one is still by far my favorite. You just cannot beat a signed card with a Powercat on it.
at 11:41 PM