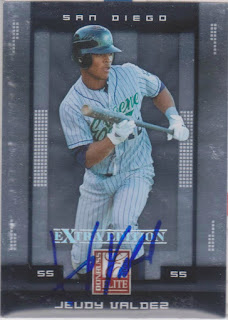 Here is another Padrograph from Rod that was given to me when we met up in Hillsboro, Oregon in 2015. This card features Padre minor leaguer Jeudy Valdez.

Jeudy had a long professional career, but he never made it up to the Majors. In fact, he never made it above AA. He played for ten seasons and did three stints in AA, but that was as far as he got. In his final season of affiliated ball in 2014, he actually spent the entire season at high-A and hit only .197. He then played in 2015 with three indy teams in three different leagues before calling it a career.

This image really helps to characterize this set. Yesterday, we had a college photo. Now we have a minor league photo with Jeudy playing for the Eugene Emeralds. This set is basically a hybrid of prospects from Bowman mixed with Bowman Draft. It is the best of both worlds with no airbrushing (or Major League teams/logos).
at 12:24 AM