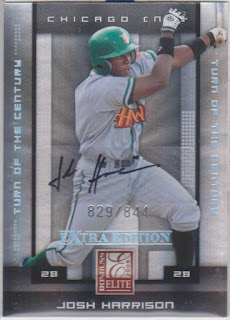 I only bought a few packs of 2008 Donruss Elite, but I was lucky enough to pull this card out of one of them. At the time, it was just a sticker autograph of a minor league player that I had never heard of. Now, it is not that bad of a pull.

Josh was originally drafted by the Cubs in the sixth round of the 2008 draft out of Cincinnati. A year later, he was dealt to the Pirates to shore up some pitching for a playoff push that never materialized. It worked out great for the Pirates, though, as they ended up with a two-time All Star and key piece to their good teams a few years back.

During Josh's eight seasons in Pittsburgh, he would hit .277 with 52 home runs and 269 RBI while playing everywhere except center field, first base, and catcher. He made All Star teams in 2014 and 2017 and had his best statistical campaigns in those two years, though his 2014 season was probably the better of the two. That year, he had career highs in average (.315), doubles (38), and runs (77).

Josh became a free agent after this past season and will be joining the Detroit Tigers this year.

Unlike the other 2008 draft picks that I have posted from this set, Josh is not sporting his college digs in this photo. He is instead pictured in the minor league uniform of the Boise Hawks.
at 11:23 PM