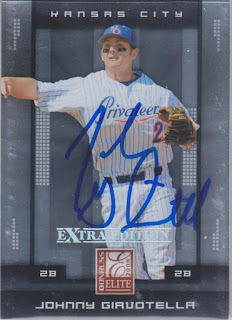 Even though I posted a card of Johnny last week, this is his first stand alone post. Ideally, I would have done a post about him when I was going through my 2008 Bowman. But, since I do not have any repeats in this Donruss Elite set besides Johnny, it just made sense for me to post this card instead.

As a Royals fan, I was looking forward to the day that Johnny was going to be their everyday second baseman. Unfortunately, that day never came. Johnny spent parts of four seasons with the club, but he played in just 125 games with them. The most games he ever got into in a single season with the Royals is 53 in 2012. He hit .236 with the team that drafted him before they dealt him to the Angels after the 2014 season. It was kind of a sad day as I feel that Johnny was never given the chance to prove that he could play everyday.

He became a free agent after that season and signed with the Orioles. He would spend most of the season in AAA, appearing in just seven games with the O's, probably the last seven games of his career. He was with two different organizations last season, but got released by each of them during the season. He is not at Spring Training this year and his career is more than likely done.

I got this card signed in Wilmington, Delaware at a Blue Rocks playoff game in 2009.
at 6:11 AM