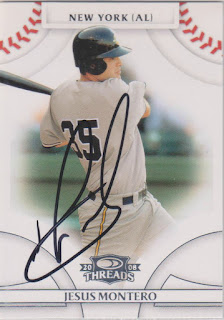 I just got back from Opening Day in Kansas City and I had a blast. Even though the weather sucked and there was nearly a two hour rain delay, I still had a fantastic time. The 'graphing was nearly nonexistent because of the rain, but I somehow managed to get a whopping three cards signed. But, that is alright. I have done worse in better weather. Plus, I ran into Travis Kelce and had him sign my autograph book. I now have two autographs in it from football players that I have met at baseball events.

Speaking of rain delays, I once sat through a four hour rain delay after getting this card signed. Jesus signed this for me prior to the Futures Game in St. Louis in 2009. About the time that game started, the rains came and almost never let off. If it hadn't been for a six hour drive to get to St. Louis, I probably would not have waited it out. I did skip the celebrity softball game, though, because of the delay.

Jesus lasted in the Majors for parts of five seasons. He broke in with the Yankees in 2011 and got off to a good start, going 20-61 in 18 games. The Yankees then traded him to the Mariners after the season and he was the every day catcher in Seattle in 2012. He responded with a .260 average with 15 homers and 62 RBI. That was his only season as a full time player.

Jesus only played in 73 games for the M's over the next three seasons and never got it going. In 2016, the M's put him on waivers during Spring Training and Jesus never played in a Major League game after that, though he did play winter baseball this past offseason.