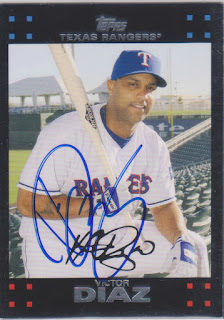 Here is a card that I got signed at a Wichita Wingnuts game in 2014. Victor had just joined the Nuts late in the season after the Mexican League had finished. He was brought on to add a bat down the stretch. While he did not do too well in Wichita, the team still managed to win their first American Association title while he was there.

2007 was the last time Victor played in the Majors. After that, he bounced around to about every league imaginable, including stints in Japan and Korea. He played last year with the Grand Prairie AirHogs of the Am-Ass and had a subpar season, hitting just .236. Being only 33 last year, I would not be surprised to see him back in the league next season.

Victor does have some cards out from his days with the Mets. But, this was the only one that I had laying around when he joined the Nuts that year. I usually get pretty excited when a former Major Leaguer comes to Wichita and I try to find at least three cards of that player. Since Victor was only here for twelve games, I was stuck with this lone card.
at 9:14 PM