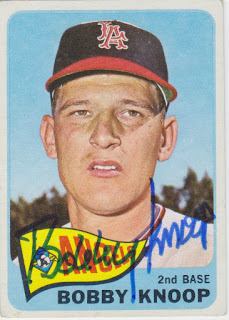 The first card from 1965 starts with my last card, for now, of a Los Angeles Angels player. The Angels moved to Anaheim in 1965 and rebranded themselves the California Angels. Luckily, the '65 Topps cards of the Angels still had this lovely LA hat with the halo on top. In '65, the team switched to a CA hat and kept the halo on top before dropping the C from the hat in 1971.

This card of Bobby Knoop was mailed to him in early 2014 and I had it back about two weeks later.

Bobby played in the Major Leagues for parts of nine seasons with the Angels, White Sox, and Royals. He was a second baseman with a good glove and a decent bat at times. I say at times because he was just a .236 hitter for his career. But, he had a monster season in 1966 when he had 17 home runs and 72 RBI. Though he hit just .232 that season, that was the only time that he ever reached double digit home runs and the 72 RBI were about 25 more than he would ever have in any other season. He was rewarded for his efforts that season by making his lone All Star team. He went 0-2 in the game with a strikeout to Jim Bunning.

That autograph on this card is a little hard to make out because of where he signed. But, with the close-up face shot, there are not any good spaces for a large signature like that.
at 1:05 PM

Nice to see all the older cards you've been posting lately.

Get professional trading signals delivered to your mobile phone daily.