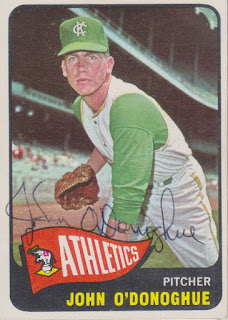 Here is the next TTM return and this one features another former Kansas City Athletic, which is always a plus. This one is from the journeyman pitcher, John O'Donoghue. I sent this card to John towards the end of 2012 and I had it back about nine days later.

John pitched in the big leagues for nine seasons with the A's, Indians, Orioles, Pilots/Brewers, and Expos. He was a starter his first few seasons in the league before moving to the bullpen for the second half of his career. Over his nine seasons, he accumulated a 39-55 record with 10 saves and a 4.07 ERA.

His best season was probably the season that he pitched for the Seattle Pilots. Pitching exclusively out of the 'pen that year, he got into 50 games and logged 70 innings. While he went just 2-2, he recorded his only sub-3 ERA for a season when he finished at 2.96. He also had a career-best 6 saves.

Surprisingly, there was one other player that pitched in the Majors named John O'Donoghue. He pitched for the Orioles in 1993.
at 9:04 PM

I got that same card signed last year in person. At least he signed yours above the team name. He signed mine through it, making it harder to see.