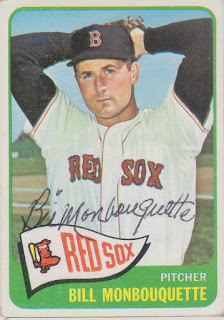 Here is a card of former Red Sox pitcher, Bill Monbouquette. I sent this card to Bill in early 2014 and I had it back just seven days later.

Bill pitched in the big leagues for eleven seasons with the Sox, Yankees, Tigers, and Giants. Over that time, he was 114-112 with 3 saves and a 3.68 ERA. He won double-digit games for six straight seasons with the Red Sox, including a career best of 20 in 1963.

Bill made three All Star teams during that stretch, but only pitched in one of them. That was the 1960 Mid-Summer Classic that Bill had the privilege of starting. He pitched just two innings in that game and gave up four runs with dingers by Ernie Banks and Del Crandall .

Bill's biggest feat was throwing a no-hitter in 1962 against the White Sox. In that game, he walked just one while striking out seven White Sox batters.