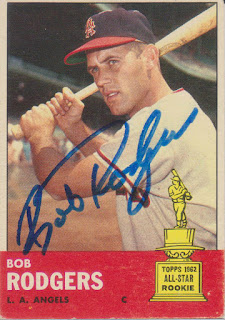 Here is the second of two cards that Buck Rogers signed for me in 2013. I posted the first one, an '81 Donruss, later that year and it can be seen here.

When I found Buck's address and saw that he signed TTM, I kept an eye out for a card from his playing days the next time I attended the Wichita card show. This was the only one I found, but I was pleased to find it as it is always fun to get a Topps rookie cup card signed. It is even more fun to get an old one signed with the original trophy. I am pretty sure that this is the oldest rookie cup card that I have signed.

Buck spent his entire playing career with the Angels. He played nine seasons with them and hit .232 with 31 home runs and 288 RBI. His best season was his rookie campaign in which he hit .258 with 6 dingers, 34 doubles, and 61 RBI.